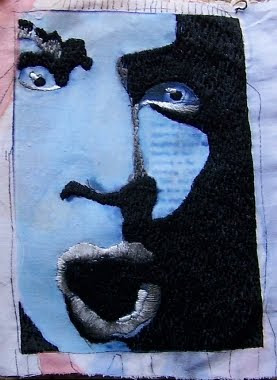 Embroidery Face
Corrine Bayraktaroglu was born in the Northeast of England, went to high school in London, married and came to America in 1978. While she has always done crafts and learned embroidery from her mother and grandparents it wasn’t until the age of 40 that she took her first formal art classes. She came under the tutelage and guidance of Marie Linnekin in 1996 at Anne Arundel Community College, Annapolis, Maryland. After a hiatus of 25 years from embroidery she picked up the thread again in 2009 using her own art and sketchbooks as inspiration.
I had an opportunity to ask Bayraktaroglu about her work in various media and living in Yellow Springs, OH. She talks here about the role of feminism in the arts in general and explains how her experience as a victim of abuse from the age of 9 until 15 gives her an empathy/understanding that is useful in engaging some of the most challenging issues expressed in her work. Bayraktaroglu also discusses her public works with Jafagirls and the freedom of working within a number of genres.
1. Tell me a little about what motivated you to return to the needle after being trained in mediums more traditional to the fine arts. Was this return a simple experiment? Was this medium choice a conscious exploration of a feminist agenda? Or were you interested in making a connection with your own personal, familial influences?
I seem to have come full circle. I have always loved texture, and after doing knit graffiti and expanding into craft graffiti I wanted to explore embroidery and see if I could use it in a new and creative way now that I had the confidence and ability to create my own designs. In the past I had no art training and depended on kits and embroidery transfers. I got excited about the idea of seeing if I could translate some of my art into stitch and seeing if I could integrate it with other media.
I view the needle as just another tool for me to work with as an artist. I can see why others do (see needlework as part of a feminist agenda) because it’s seen and treated as a just a female craft/ hobby using kits and making pretty little doodads. Making a feminist statement with it is a reaction to that perception but I never regarded it a feminine craft/art even though it was historically foisted on women as the only artistic outlet we were allowed to participate in. To me that would be like saying painting is a man’s craft because historically only men were allowed to train for it and do it. I was excited by the idea of exploring another Medium that I had always enjoyed in the past, and the challenge of seeing if I could integrate it with other mediums. 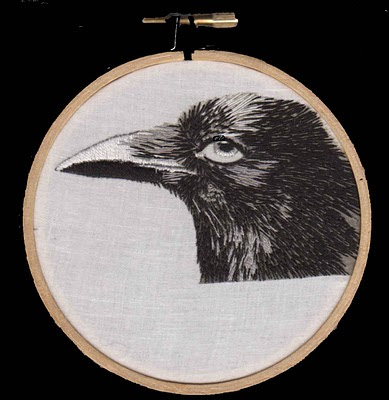 2. You say your work is created as a response to the world around you. All artists can make this claim. Further, I find that is much too simple a description of your creative process. Not only does your work require time, the results are simply exquisite. From your homage to artists like Frida Kahlo and Basquiat to your social commentaries as well as personal reflections reveal such a vast visual language that hardly reflects impulsiveness. With so many tools of art, how do you determine which to use? Describe this dance between the mediums.
Perhaps I need to add the word impulsive because generally my work is born out of an immediate reaction to something or idea that pops into my head and a primary need to express it visually. Just as people talk about what they feel and what is going on around them, I use my art in the same way. I have to scribble them down lest I forget because sometimes so many ideas/visions are popping up. The actual process, the implementation of an idea does take time.
The process really depends on the idea, if it comes in the form of a word or an image. Sometimes I am just in the mood to paint, or the weather permits me to work in my workshop and shelved ideas (that I had scribbled down) pop up that are perfectly suited for my mood. I will try to keep it short but here’s an example. I was reading about child trafficking and an image popped up of a young girl trapped in a small filthy room waiting for the next customer. I remembered how it felt to be in a room waiting for my abuser and how I wanted to fly away. I decided to use the wings of a bird I had in my studio and make this an assemblage with a box for the small nasty room. That determined the size of the piece. How I feel about the men who abuse and exploit women is manifested in the shape of a carrion bird who feeds off these young women/girls. That’s when I decided to do an embroidery version of the crow (above) since the stitches are soft like the feathers and a human eye to show that the bird is disguised and is really human carrion. Slowly how this piece will represent my initial thought has evolved and I processed how I felt about it. 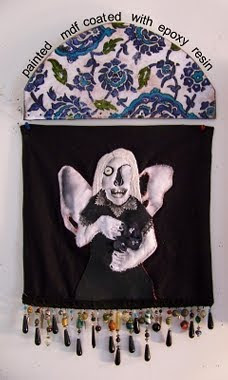 Shiny Pretty Things
3. You mention a sense of freedom you have “to work between genres, disciplines, mediums, between fine art and craft, high art and low art.” This freedom comes no doubt from your ability to work in various mediums. But was there any pressure to choose a definitive genre or discipline? Does refusing to be categorized force your work in front of a smaller audience than you may wish?
There is a quiet pressure, and sometimes outright pressure by other artists/art school teachers/galleries who don’t feel you are dedicated to one medium and therefore don’t take you seriously. I had so many people asking me if I had quit painting or presumed I would because I started doing embroidery again which I found strange. I respect and understand galleries wanting a specific style etc, they are trying to earn a living and cater to a specific genre/
market/customer base. I am very lucky to be in a gallery (IN A FRAME) in Yellow Springs that uses my diversity as a selling point. It does limit the audience of my work, but since the compelling reason to create is influenced by internal needs rather than external concerns I don’t really worry about it. 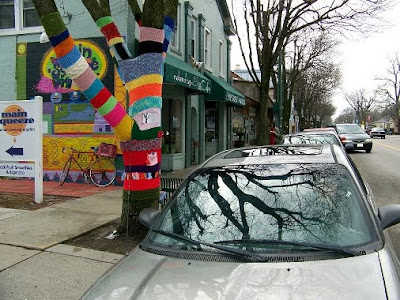 4. I became more acquainted with your work by way of your graffiti knit projects I found around Yellow Springs. When did Jafagirls begin?

In 2005 with a friend who has since moved out of state. Now it primarily Nancy Mellon and myself along with what we call jafa cohorts or conspirators lol. It means just another F*&c*&^ing artist, and for me a humbling reminder that I am one amongst many just trying to do my own thing my way. 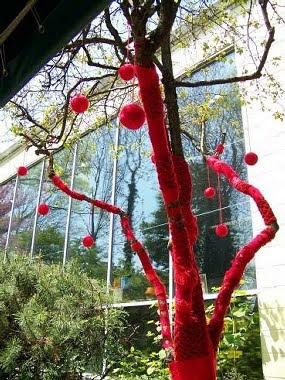 5. Unlike most graffiti and most cities, this work is accepted and even celebrated by the residents of Yellow Springs. Has this always been the case? Can anyone “scarve” a tree, pole, or bench in Yellow Springs?

Yes, from the get go we had so much support, but we live in a village that embraces creativity, which is not to say some people didn’t express concerns. We did our research and were able to address those concerns I believe. As for whether others can yarnbomb around town, that is not for me to say ;)
6. It is not only the various mediums and subjects in which you make art that reveal your expressiveness, you are an incredible advocate for the arts and the community of Yellow Springs. Through your blog you link to so many wonderful finds you encounter throughout the day. It is as if you are the community art curator of Yellow Springs, OH. Do you curate exhibitions for local artists?
Nancy and I have curated a few exhibits as members of the Yellow Springs Arts Council over the years. Nancy and I created a gallery in the local restroom for 4 years called the “chamberpot gallery”, and less formally we facilitated an exhibit in a local café, and the flower power street art project in June 2010. At the moment we are preparing a group installation of public art called the pub alley project. 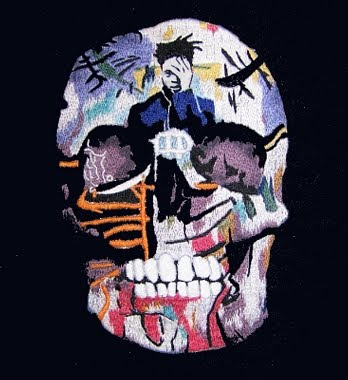 Teef: Homage to Basquiat
7. With such a strong connection to the local art community, how do you make yourself part of national or even international conversations? I mean how do you as an artist connect with the national or international conversations on art. I'm referring to a possibility or tendency for one to remain cloistered in a small self-defined community while the art world rolls by. Perhaps you don't have this problem....I certainly don't see it in your work. I suppose this is why I ask.

I am insanely curious person and love history and the arts/crafts . I think my years of exploring castles, antique markets and museums around the uk as a child and young adult and living and travelling in a variety of states in the usa I’ve been exposed to a very broad range of arts and crafts. I would say this has allowed for a more global view of the arts and given me an better understanding of the context. For example when I think of embroidery I think about in terms of the of the role it has played for centuries, socially, culturally and economically. What British child isn’t taught about 1066, and one of the most important historical documents about 1066 is the Bayeux Tapestry (which is actually embroidery and believed to have been commissioned in 1070). People who have never been exposed to this type of history or seen ancient textile arts may have more difficult time seeing embroidery as anything other than the stereotyped view, which might explain why I don’t’ see doing embroidery as a feminist reaction.


Corrine Bayraktaroglu has been doing her blog, Jafabrit’s Art, for about 5 years as well as the Jafagirls blog. She's been been doing the Yellow Springs Arts blog, which is also a support blog for the arts council, for about 4 years. She and Nancy have just recently started a blogtalk radio show called Bits and Bob’s with the Jafagirls.