Ancestors of the Passage: Work by Puerto Rican artist Imna Arroyo at The William Benton Museum of Art 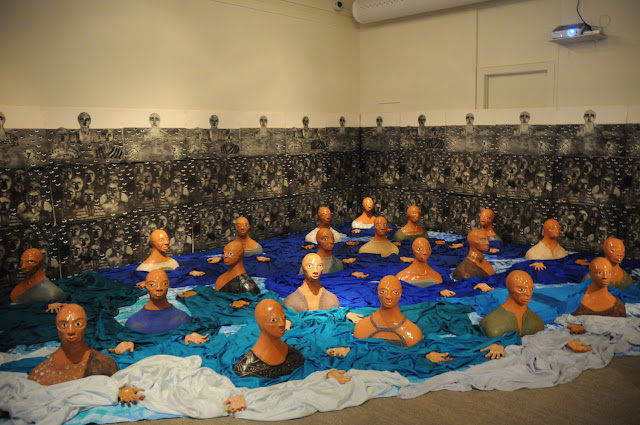 Ancestors of the Passage:  Journey Through the Middle Passage.
Instillation by Imna Arroyo. 2018

Inspired by this year’s UConn Reads selected book, Viet Thanh Nguyen’s The Refugees, and the histories of voluntary and involuntary immigration that brought us to become American. Imna Arroyo’s art installation explores the forced immigration of slaves from Africa. The ancestors of the Middle Passage, those who had been on slave ships going from Africa to the Caribbean who did not survive. Life size terracotta ceramic distinctive figures are submerged in the water surrounded by collagraphs representing a multitude of people witnessing the journey. The terracotta figures depict the African ancestors that died and are coming back to tell us to remember our gifts. This artwork attempts to gives a visual voice to the untold story of the millions of people who died during the Atlantic crossing. 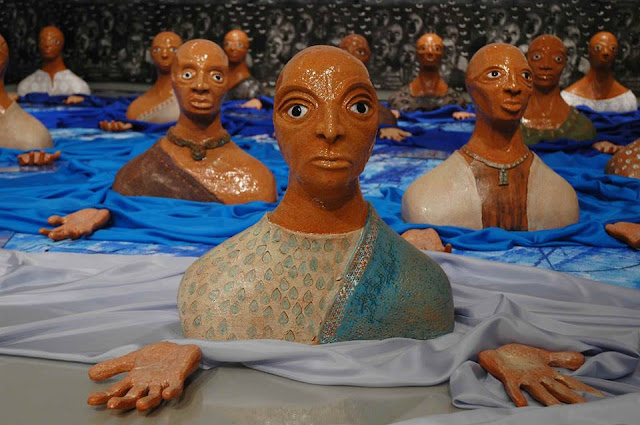 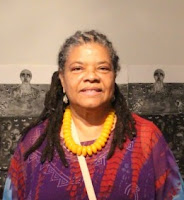 Imna Arroyo Photo: LJ Karam
Recipient of many awards in recognition of her public service, Arroyo has been an active member on many international committees such as the President for the national Women’s Caucus for Art (1996-1998) and a member who helped form the Collectivo Mestizal, a Latin American and Caribbean group who promotes Latino arts, education and culture, to name a few. Her artwork has been exhibited internationally, including the United States, Mexico and Cuba.
This exhibition is a collaboration with: The Puerto Rican/Latin American Cultural Center; El Instituto: Institute of Latina/o, Caribbean, and Latin American Studies; the Asian and Asian American Studies Institute; and the Art and Art History Department of the School of Fine Arts, University of Connecticut.
The Studio Art Faculty Exhibition and “Ancestors of the Passage” will remain on display in the Benton through March 11. For more information regarding the installation, please contact the William Benton Museum of Art at (860) 486-4520.

Ancestors of the Passage: Work by Puerto Rican artist Imna Arroyo at The William Benton Museum of Art