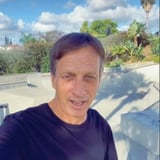 When I was a kid, I always looked up to Mia Hamm. As one of the best soccer players in the world, I had always wanted to emulate her. Cooper, a young skateboarder from Georgia, looks up to Tony Hawk, naturally. He admires the 52-year-old father of four so much, he recently attempted to send him an old skateboard.

Although Cooper didn't have Tony's address, he left his gift with Mikail, a FedEx delivery worker, who thoughtfully used his large TikTok following to try to get the message to Tony.

Related:
A 4th-Grader Offered to Walk His Neighbor's Puppy "After This Virus," and My Heart!

In the popular video Mikhail explained how the situation unfolded: "So I'm doing my delivery route today and I see this little kid chasing my truck trying to flag me down," he said. "He's like 'Excuse me! Excuse me!' So I pull over and I'm like, 'Hey man, what's up?' He's like, 'Can you mail something for me?' And I was like, 'Yeah, sure.' And he runs into his house and comes back out and he goes, 'Do you know the pro skater Tony Hawk?' And I was like, 'Yeah I know who he is.'"

At that point, Cooper handed Mikhail a worn skateboard meant for his idol. Naturally, the delivery driver thought it was "adorable" and told him he'd see what he could do. Although Mikhail couldn't get the board to Tony's house, his TikTok video caught the professional skater's eye.

On May 19, Tony made a TikTok of his own, giving Cooper a well-deserved shoutout as well as the promise of sending his fan a new board of his own.

According to an update from Mikhail, Cooper is eagerly awaiting his skateboard's arrival. We can't wait to see this sweet little boy in the X Games one day!

Autobiography of a Boob