Stuck Landings and All Smiles: Watch Gymnast Trinity Thomas Get a Perfect 10 on Floor 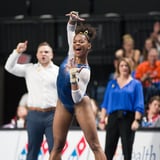 Trinity Thomas, a sophomore at the University of Florida, received a perfect 10 on floor over the weekend against Penn State, right before International Women's Day, no less. The routine opens with a huge double layout - that's two flips in a stretched position - and the lines in her jumps and leaps are basically on par with some of the most elegant American gymnasts we've seen (think Nastia Liukin). You'll get what I mean when you see Thomas do a contortion move on cue with the music. Speaking of music, Thomas's is a catchy mix between classical and dance (what some might call "house"), and she's all smiles at the end of her routine after landing her double pike down solid.

This 10.00 was especially exciting for Thomas because it was received right near her hometown of York, PA. Plus, the perfect score made her the first gymnast in the NCAA so far this year with a 10.00 in three different events. This was Thomas's fourth 10.00 of her career - she received one on bars and two on beam earlier this season.

Thomas is also a member of the 2019-2020 US women's senior national team, along with Simone Biles, MyKayla Skinner, and Morgan Hurd. As it turns out, she's the only member of that team who is currently competing in the NCAA - in other words, she's doing both elite-level and collegiate-level gymnastics. What's more, she'll be training hard with the hopes of earning one of the four spots on the 2020 Olympic team. Watch Thomas's perfect-10 floor routine above, and check out our full feature on this powerhouse gymnast here.

Stuck Landings and All Smiles: Watch Gymnast Trinity Thomas Get a Perfect 10 on Floor