Wes Anderson’s The French Dispatch Is an Ode to French Culture, Journalism, and Weirdos Everywhere 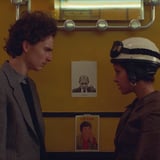 Finally, we have the first trailer for The French Dispatch, and it's basically everything you'd want and expect from a Wes Anderson film. Set in a fictional 20th-century French city, the dramatic comedy follows a group of American journalists and brings to life the stories they publish in The French Dispatch magazine.

The cast for The French Dispatch is ridiculously stacked. Not only does Timothée Chalamet feature as a wild-haired, cigarette-smoking, bath-taking man, but Saoirse Ronan, Links">Elisabeth Moss, Links">Bill Murray, and Links">Owen Wilson (plus so many more) also make an appearance.

If the trailer is anything to go by, the film will flit between Anderson's typical candy-colored backdrops and black and white scenes - all with a heavy dose of outrageousness. The French Dispatch is set for release this Summer on July 24.

Wes Anderson’s The French Dispatch Is an Ode to French Culture, Journalism, and Weirdos Everywhere