The 47 Meters Down: Uncaged Trailer Is Here, and No, I'll Never Go Back in the Water 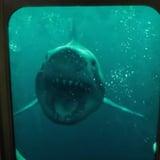 Although the idea of scuba diving in a claustrophobic, remote, ruined underwater city makes my skin crawl and my lungs involuntarily close up, the heroines in 47 Meters Down: Uncaged - played by Brianne Tju, Corinne Foxx, Sistine Rose Stallone, and Sophie Nélisse - apparently want nothing more. So, they venture into a labyrinth of submerged caves in hopes of seeing some non-touristy wonders, but unfortunately discover that there's a surprise lurking down there: a bunch of deadly great white sharks! Uh-oh.

In the Trailer for the sequel to the 2017 Horror Movie starring Links">Mandy Moore, which is due out on Aug. 16, we see the characters try to outsmart the sharks while running out of air, getting whipped around by powerful riptides, getting lost in the cave's tunnels. So, basically it's like horror movie classic The Descent, only with sharks. (*shudders*) Watch the trailer above, and then check out all the other shark movies you should add to your watch list if you never want to get back in the water again.

The 47 Meters Down: Uncaged Trailer Is Here, and No, I'll Never Go Back in the Water