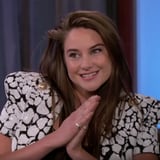 Brace yourselves: Shailene Woodley might have just given away the biggest Big Little Lies season two spoiler yet, and it has me internally screaming like Mary Louise at the dinner table. With only one episode left to look forward to this season (and possibly ever), Big Little Lies fans, myself included, are desperate for any hints at what might happen in the show's season two finale - but I wasn't expecting it to happen like this.

Where To Stay In Santorini On A Budge…
Conquer Job Interview Nerves With Thi…
11 Things Depression has done, and it…
VeChain Price Analysis: Who will Take…
87 Ideas to Start a Side Hustle Busin…

In an interview with Jimmy Kimmel on Tuesday, Woodley explained that she's been asked to stay tight-lipped about any spoilers for the season two finale, but surprisingly, there was one interesting tidbit she was allowed to share. "They did say I could say this: In the beginning of the next episode, it's a little bit of a cliffhanger, but all the women go to visit Perry's grave, and his body is missing." Um, excuse me?!

Look, I love a good zombie show as much as the next person, but a missing body is not the twist I expected Big Little Lies to take. Of course, if what Woodley says is true - and not just a faux spoiler meant to throw us off - then perhaps someone is trying to cover up the group's tracks by disposing of Perry's body, or at least exhuming it for investigative purposes. Who knows? Since the supposed spoiler happens at the beginning of the episode, Kimmel joked that it isn't really a "cliffhanger," but technicalities aside, this could mean serious trouble for Jane and the rest of the Monterey 5. Here's to hoping Sunday's episode doesn't make me want to throw an ice cream cone out of rage.