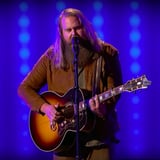 For some, impressing Links">Simon Cowell just once is a challenge, but for Chris Kläfford, it's been achievable twice over. The Swedish singer wowed the America's Got Talent judges and audiences with his stunning audition last week, and on Tuesday night's episode, he proved his talents extend to songwriting as well. Kläfford debuted an original tune titled "Something Like Me" for Cowell, Julianne Hough, Howie Mandel, Links">Gabrielle Union, and guest judge Brad Paisley, and his performance earned him a standing ovation.

$50 Million Stolen from Upbit
Afraid or not, life still marches for…
Is It Possible to Talk to the Dead?
FRONTLINE UKRAINE - Americans in Ukra…
Where Songs Come From: Boy Gone Bad (…

His decision to go with an original song might be considered a risky move, but it definitely paid off in the end. "I watched your first audition back, and I wasn't that excited as I thought I was, so I was concerned if you came back and did a cover," Cowell admitted to the singer.

That said, he enjoyed Kläfford's departure from the norm. "The song actually enabled us to learn more about you and who you are. It wasn't a risk - a risk would've been not doing that. You've made our jobs a little bit harder now because it was that good." Watch Kläfford's touching performance above to see why it earned him such high praise.