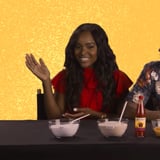 The Cast of Dear White People came together to announce the Netflix premiere date of season three - Aug. 2 - and ring in Juneteenth by grabbing a bowl of grits and debating the eternal question that plagues us all: which grits are better, salty or sweet?

In celebration of the American holiday - also known as Juneteenth Independence Day or Freedom Day - that commemorates the abolition of slavery in the US state of Texas, and more generally the emancipation of African Americans throughout the Confederate States of America, the cast offers their personal opinions on what makes grits so delicious, whether they're salty or sweet. The final tally is evenly stacked, but what's more important is the news that we're finally getting back to Winchester University for the highly awaited third volume of the series!

Now, the teaser doesn't hint at anything that's coming up on DWP: Volume 3, but season two left us off pondering the secretive Order of X and that awesome finale reveal. Who is the mysterious gentleman that Sam and Lionel meet - who just happens to be played by actor Giancarlo Esposito, aka the show's narrator since its premiere. Does this mean he's been watching everyone since the beginning? And what is going on with Joelle and Reggie? We have so many questions! Stay tuned, Aug. 2 will be here before we know it.