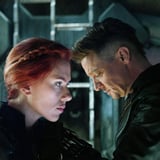 Avengers: Endgame writers Christopher Markus and Stephen McFeely (Thor: The Dark World, Infinity War) recently sat down for an interview with The New York Times about their recent box office smash, and in addition to reflecting on the legacy left behind by the Avengers franchise, the pair were game to discuss two fairly divisive moments from the most recent film: Black Widow's exit and that lady superhero team-up moment.

The first, the unexpected death of Natasha "Nat" Romanoff (aka Black Widow) , takes place earlier on in the film. After the remaining Avengers realize that they need to travel back in time and retrieve the Infinity Stones before Thanos does, Nat and Clint (aka Hawkeye) are tasked with journeying to retrieve the Soul Stone on the planet Vormir. What they don't realize until they arrive is that in order to take it with them, they need to trade "a soul for a soul."

After the best friends battle to jump off the cliff to sacrifice themselves in order to save the other, Nat finally promises Clint "it's OK" for him to let her go. She then plummets to her death, laying at the base of the cliff in a similar position to Gamora when she suffers the same fate in Infinity War. Considering Nat has consistently been relegated to being the tough, stoic supporting figure to leads like Captain America and Iron Man despite being the only female Avenger and boasting a rich backstory, fans have been vocal about how angry her exit from the film has made them.

Related:
You'll Drop Your Infinity Stones After Seeing How Much Avengers: Endgame Made at the Box Office

"Her journey, in our minds, had come to an end if she could get the Avengers back," McFeely said, noting that he and Markus were aware that watching the all-male group of Avengers weep over her loss might not be great for optics. "The toughest thing for us was we were always worried that people weren't going to have time to be sad enough. The stakes are still out there and they haven't solved the problem. But we lost a big character - a female character - how do we honor it? We have this male lens and it's a lot of guys being sad that a woman died."

"And it is only right and proper that she's done."

In fact, this worry led the writers to pen a draft that saw Hawkeye dying on Vormir instead. But when one of their colleagues read the alternate ending, she suggested they have Nat take the hit. "Jen Underdahl, our visual effects producer, read an outline or draft where Hawkeye goes over," McFeely recalled. "And she goes, 'Don't you take this away from her.' I actually get emotional thinking about it." Markus agreed, adding, "And it was true, it was him taking the hit for her. It was melodramatic to have him die and not get his family back. And it is only right and proper that she's done."

Another moment in Endgame centering around the film's female characters is taking heat from fans, but for a very different reason. The scene happens late in the game, as Brie Larson's Captain Marvel tries to keep the Infinity Gauntlet away from Thanos in the midst of a chaotic battle between all the recently reunited Avengers and the purple big bad's massive army. To help her, all the lady superheros we've met over the years - the Wasp, Okoye, Scarlet Witch, Valkyrie, and more - assemble out of nowhere in a scene that comes just short of flashing the word "FEMINISM" in all caps across the screen.

Regardless of whether or not the moment made you want to stand up and cheer or roll your eyes right out of your head and onto the movie theater floor, the riskiness of including it at all wasn't lost on the writers. "Is that delightful or is it pandering? We went around and around on that," McFeely said. "Ultimately, we went, 'We like it too much.'" Markus added, "Part of the fun of the Avengers movies has always been team-ups. Marvel has been amassing this huge roster of characters. You've got crazy aliens. You've got that many badass women. You've got three or four people in Iron Man suits."

So, even though Black Widow is no more (until her origin story premieres, of course), there's hope that the rest of the ass-kicking female heroes in the MCU will be able to continue her legacy. Read the screenwriters' interview with The New York Times in full here.

Deep Story, Casual and Another in Mystic Messenger – Which one to play and what order?

AT THE MOVIES - Avengers Endgame Clip