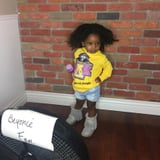 You may think you're Beyoncé's biggest fan, but do you literally have a complementary "Beyoncé fan"? If not, you'll probably want to defer to 2-year-old Kali Brown, who has that and more. What she lacks in years she makes up for with pure Queen Bey passion - so much so that she dressed up in her "Beyoncé Alpha Knowles" best for Halloween.

Kali's mom, Shenika Paris shared a video and a few snaps of Kali (er, I mean "Kalchella") in action on Instagram, all decked out in a tiny replica of the singer's memorable college-themed Coachella outfit. They got every detail of Bey's original look in place, which makes sense, since Shenika told POPSUGAR she and Kali watch Bey's historic performance together once a week. That must be where she learned her moves, too.

In the photo's caption, Shenika said it's "only right" that her little girl chose this Costume, since Kali "constantly says, 'I look like Beyoncé.'" No argument here! From her fierce pop star attitude to her picture-perfect outfit, we're a little starstruck just looking at Kali's spot-on costume.