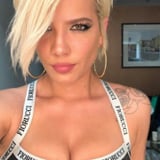 On April 6, Halsey posted a few selfies on Twitter. While we were mostly staring at her low-parted updo, one user decided to focus in on the slight fuzz poking out from under her armpits. (Let the collective eye rolls begin.)

what the hell is this ?!!! pic.twitter.com/jpWZmxlgJ2

It looks like the troll covered Halsey's armpit with a "LOL" sticker and captioned the picture, "what the hell is this ?!!!" The 23-year-old singer/songwriter was happy to clarify:

It's an armpit you've put a sticker over. Not sure what else there is here to explain? https://t.co/cLhMxVilyZ

Halsey's mic-drop Tweet reads: "It's an armpit you've put a sticker over. Not sure what else there is here to explain?" Of course, she could have gone into a deeper discussion about how a woman's choice to keep or remove body hair is her own damn decision, but why waste her precious time defending such a obvious statement? Plus, Halsey's followers were quick to jump in on the assist:

Okay but men don't have a say in what women do with their bodies. We don't care what y'all prefer

breaking news: yet another man is shooketh to the core that women grows hair baffled about it and demands explanation ASAP 😲😲😲 pic.twitter.com/CV5wEKoXSI

Halsey: "Bad at Love," but f*cking fantastic with the comebacks.