Should You Grunt Through a Workout? Thoughts From a Trainer 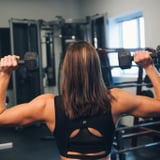 Grunting. That Noise you make when digging deep to exert physical force. Some of us do it when opening a pesky pickle jar, some when they are trying to bench press their bodyweight. The Williams sisters made grunting cool in tennis, long after Monica Seles became the most famous female grunter and created controversy with her particular brand of tennis noise, a half scream/half groan every time she hit the ball. Noise-making while engaged in sporting pursuits is not limited to tennis. Weightlifters are notorious for making grunts, groans, or even hissing noises while engaged in their craft. Heck, I've groaned in yoga when a particular sequence was very challenging. Vocalizing effort is part of the natural cycle of energy output for some, but how much is too much?
Related
A Trainer Gets Brutally Honest About Why You Aren't Seeing Results

Jaime Fisher, fitness director with the YMCA in Frederick, MD, notes that in her experience, there is productive and counterproductive workout noise. Noise that is a byproduct of effort which directly ties in to the task at hand and is relatively short in duration is normal and appropriate. Where her instinct is to discourage willful noise, Fisher admits that in in some circumstances, a grunt or growl "unleashes your inner warrior" and can help to psych a person up for something strenuous or difficult. She is quick to remind that noise that is disruptive, repetitive, and annoying to other members is something that needs to be checked.

Fisher is not alone in her assessment, but it can be a tight line to walk. Planet Fitness attracted media attention back in 2006 for asking a member to leave after he refused to comply with their "no grunting" policy. A Manhattan studio was left with legal issues to sort out in 2007 when one member allegedly attacked another over his overly loud participation during a cycling class.

Ask athletes that vocalize their efforts and they will tell you it is an integral and often unconscious aspect of their power game. Take the grunt away, and performance diminishes - at least, from the athlete's perspective. Even though some researchers have found a correlation between grunting and velocity increases in serving and forehands in tennis, others chalk it up to habits formed when developing technique. Changing the habit abruptly could affect performance. Case in point: in 1992, after Martina Navratilova lodged a complaint against her in the semifinals, Monica Seles attempted to quiet her signature noises in the finals and ended up losing to Steffi Graf. To this day she regrets making that change. Was that the reason she lost? Who knows? But it couldn't have helped.

Hayman – Roasted Grind Coffee
The Mysterious and Majestic Atacama D…
Momentum True Wireless 3: Sennheiser’…
Useful Tips for Building a Stronger C…
How come so many Christians don’t rea…
What we do need to ask ourselves, if we are the noisy ones out there, is why are we doing it? Breath is intricately tied to all movement, and deep breathing paired with tightening the core is a fundamental preparation for any kind of strength work. When action or movement occurs (especially the explosive kind, e.g., weightlifting or plyometric activity), breath is expelled, often forcibly. Yoga practitioners seek the audible breath; it's called ujjayi breathing and calls for a full-belly inhale through the nostrils followed by a closed mouth exhale that creates a wave-like sound at the back of the throat. It is integral to the practice. In a yoga class, noises like these would be appropriate and expected. Would we expect someone to engage in ocean-style breathing next to us in a barre class? Probably not.
Related
Drop These 11 Bad Habits to Keep Your Fitness Goals on Track

It's a matter of courtesy, in many ways, to note how our behavior affects those around us, especially if we work out in the company of other humans. No one enjoys using a machine after a sweatier-than-thou person refuses to wipe it down. We don't like someone setting up their weights or mat right on top of our things or the cardinal sin of treadmills: when a newcomer selects the one right next to you when there are others down the row that are vacant.

If you need to grunt or moan or sigh when you work out, make it about your effort and not about getting attention. If it is bothering other people, know that a complaint may come your direction, either from other participants or management. You may consider taking it down a notch (over time, so as not to affect your performance). If controlled vocalizations truly help you in your pursuit of greater fitness and you aren't bothering anyone, why change? It's part of our unique fabric, how we express ourselves, both in and out of the gym. Just remember we are all in it together. Be courteous, be mindful, and be respectful.

Should You Grunt Through a Workout? Thoughts From a Trainer