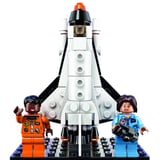 Four of the most accomplished Women in STEM are about to be celebrated with the highest pop culture accolade in America: a Lego set in their honor.

Nancy Grace Roman, Margaret Hamilton, Sally Ride, and Mae Jemison are the four Nasa veterans featured in the special "Women of NASA" set, which will hit stores on Nov. 1. Included in the package are a Hubble Space Telescope, an Apollo Guidance Computer, and the Space Shuttle Challenger - all iconic images of the glory days of the historic NASA program. It's no surprise, then, that the set was the brainchild of the brilliant Maia Weinstock, deputy editor of MIT News, or that Lego hopes the set will not only serve as a way to laud the many, many accomplishments of women in the science and engineering fields but also encourage young women to consider careers in STEM in general. Weinstock originally submitted the concept to Lego's Ideas crowdsourcing platform, where the pitch quickly garnered widespread support among Lego's most diehard fans - and now, what was once a remarkably good idea is about to become reality.

Driving a Car Christian Dream Meaning
Sex on Your Period – Reasons to Do It
Branding 101: From Bingo to Bedroom D…

"In all realms of science, engineering, and technology, pioneering women have historically been underappreciated for their often groundbreaking work. We have also seen that when girls and women are given more encouragement in the STEM fields, they become more likely to pursue careers in these areas," Weinstock said in a statement, adding, "With this project, I wanted to spotlight a fantastic group of women who have made seminal contributions to NASA history. My dream would be to know that the first human on Mars - or an engineer or computer scientist who helped her get there - played with the LEGO Women of NASA as a child and was inspired to pursue a STEM career as a result."

A few more images of the set are below, and be sure to pick one up for yourself in November - there's truly no better way to unwind than with the combination of female empowerment and a good ol' Lego set.

Nancy Grace Roman, one of the first female executives at NASA:

Margaret Hamilton, creator of some of the most vital software in the computer science field: