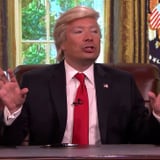 Are you sick of the dishonest liberal media constantly spreading fake news? Do you cringe at the thought of any fact that isn't an "alternative" one that suits your beliefs? Would you prefer to hear about imaginary terror attacks in Sweden rather than the current refugee crisis? Then Trump News Network is probably for you! Like Alec Baldwin on SNL, Jimmy Fallon is choosing to deal with the everyday absurdity of our nation's president with humor (a welcome change from humanizing a man who brags about sexual assault). His skit on The Tonight Show on Tuesday, though funny, feels all too real as he imagines a world with a Trump-owned news network. "It's the only news network that's 100 percent fair and 112 percent factual," he jokes, before warning everyone that a Godzilla attack on Finland is imminent.