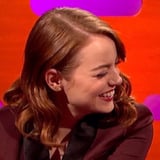 Emma Stone and Ryan Gosling may be garnering attention for their celestial dance moves in La La Land, but Emma wasn't always the graceful dancer she is today. While promoting the film overseas, Emma and Ryan stopped by The Graham Norton Show, where the actress revealed that their Dirty Dancing lift in Crazy, Stupid, Love didn't initially go as smoothly as they hoped. "I had an internalized phobia about being lifted six feet in the air and it all went horribly wrong," she explained. Emma then admitted that she had a "full meltdown," to which Ryan added, "I've never had this experience, but I can only imagine if a possum fell out of a tree, landed on my head, and tried to scratch my eyes out, it would be something similar!" Could these two be any cuter? Watch the scene in question below.

Quick Tips To Talk Yourself Down From…
You Say Covid-19, I Say Hangar 18!
15 Top Trends for Kitchen Design for …
Exhibit C: The beauty of chunky blank…
Three Lucky things that have happened…
Related:
Emma Stone and Ryan Gosling Clearly Have Crazy, Stupid, Love For Each Other
Ryan Gosling and Emma Stone React to That Ryan Reynolds and Andrew Garfield Kiss: "I'm Happy For Them"