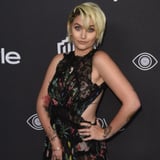 A teaser for British TV movie Urban Myths was released earlier this week, and one person who isn't happy with the results is Michael Jackson's daughter, Paris. After it was revealed that Joseph Fiennes, a white man, would play Michael, the internet went into a frenzy, as did Paris, who shared her disgust over the controversial casting on Twitter on Tuesday. In a series of tweets, the 18-year-old admitted to being "incredibly offended" by the casting, adding, "It honestly makes me want to vomit." Her cousin Taj Jackson also weighed in, saying, "Unfortunately this is what my family has to deal with. No words could express the blatant disrespect."

Introducing Superior Painters® Sub-Di…
The Neighborhood Bar that Grew Three …
Three things I learned while circling…
Motivational Tips to Help You Stick …
CBD 2020: What to Expect + Our Top Pr…

@TheMJCast i'm so incredibly offended by it, as i'm sure plenty of people are as well, and it honestly makes me want to vomit.

@TheMJCast it angers me to see how obviously intentional it was for them to be this insulting, not just towards my father, but my godmother liz as well

@TheMJCast where is the respect? they worked through blood sweat and tears for ages to create such profound and remarkable legacies. shameful portrayal

Paris's outrage was felt by Sky Arts in the UK, the channel the program was set to air on, as they announced on Friday that the episode has been pulled. "We set out to take a lighthearted look at reportedly true events and never intended to cause any offense," the company said about the episode, which would have focused on a rumored road trip that Michael went on with Elizabeth Taylor and Marlon Brando after 9/11. "We have taken the decision not to broadcast 'Elizabeth, Michael and Marlon,' a half-hour episode from the Sky Arts Urban Myths series, in light of the concerns expressed by Michael Jackson's immediate family. Joseph Fiennes fully supports our decision."

Related:
Paris Jackson Is All Grown Up and Gorgeous at a Golden Globes Afterparty