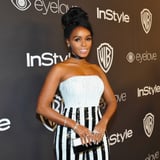 Janelle Monaé is no rookie in this business. The 31-year-old entertainer released her first studio album in 2003 as an independent artist under her own Record Label, Wondaland Arts Society. Janelle went on to become a six-time Grammy nominated artist, and in 2016 The Electric Lady reached for even bigger heights when she signed on to star in the scientific biopic Hidden Figures alongside Taraji P. Henson and Octavia Spencer, and in Moonlight, a coming-of-age drama widely considered to be a best picture contender at the Oscars this year. Keep reading to discover 15 other facts you need to know about one of Hollywood's rising stars.