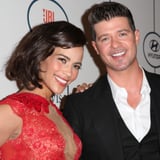 Paula Patton filed for divorce from then-husband Robin Thicke back in 2014, and it looks like their legal battles are far from over. The former couple shares a 6-year-old son, Julian, and on Thursday it was revealed that the "Blurred Lines" singer is being investigated for alleged child abuse by the Los Angeles County Department of Child and Family Services in connection to his and Paula's ongoing custody battle. According to court documents obtained by Us Weekly, Julian reportedly told school officials that his father "spanked him more than once," leading to them getting the DCFS involved on Jan. 3. The organization has interviewed Julian as part of their investigation and was scheduled to talk to Robin on Thursday afternoon.

“If I live through this, I want someo…
Remembrance Day, as Seen Through the …
UNITED KINGDOM - Brink of Brexit
Cryptocurrency Prospect, Review of Sa…
The 20 Questions Book Tag

This reportedly resulted in the Warcraft actress barring Robin access to their son and filing an emergency order with a judge to limit his time with Julian to supervised visits during the day only. The Grammy nominee maintains that the only thing that happened was a "light spanking," according to the court documents. "On a very rare occasion and only as a last resort, I will use light spanking, but it is consistent with the law -- open hand on the butt," he said. Robin then goes on to claim the entire incident is rooted in Paula's anger at not being invited to the funeral of Robin's late father, Alan Thicke, in December. "It is my belief that Paula holds residual anger towards me because I and my family would not permit her or her family to attend the funeral of my father on December 20, 2016," he alleged. "Paula did not have a positive relationship with my father. . . . As such, she was not welcome at his funeral. It is my belief that Paula only wanted to attend because it would have resulted in additional public exposure for her." After the Growing Pains star passed, Paula shared a moving message about him on Instagram.

A source told Us Weekly that a "judge denied everything in [Patton's] complaint" and that "Child Protective Services didn't see any evidence of wrongdoing." We will update this post with further information as it becomes available.

Related:
Robin Thicke Breaks His Silence on Dad Alan's Death: He Was the "Greatest Man I Ever Met"