Silas Timberlake Isn't Even 2 Years Old and He's Already Grounded (From Hollywood, That Is) 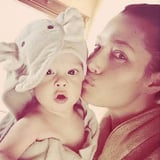 Jessica Biel and Justin Timberlake welcomed their adorable son, Silas, in April 2015, and it was only a matter of time before people started asking if he'd inherited his proud parents' love of music and acting. According to Jessica? "Probably." While hitting the red carpet for her new movie, The Book of Love, the mom told E! News that Silas is "definitely very charming" and "full of beans." Despite his potential for show business, she's hoping that he stays far, far away from Hollywood. "It's such a challenging existence being an artist," she said. "It's hard. I just want him to be happy whatever he does." Although there's no way of knowing for sure if Silas will pursue a career in show business in the future, he's already got somewhat of an acting credit on his résumé. While filming The Book of Love, Jessica was eight months pregnant with her son, meaning Silas is technically in the movie, too. If he doesn't end up becoming an actor or a singer, though, at least we know he probably has a bright future as a dancer ahead of him.

Beautiful Celebrity Couple Pics
All About Wealthy Affiliate – Is It R…
Marvel Ultimate Alliance 3 Is A Love …
Sapphic Retellings
Long Island Sounds March 2019
Related:
Justin Timberlake Has the Most Hilarious Reaction to Hearing That Jessica Biel Is Pregnant

Silas Timberlake Isn't Even 2 Years Old and He's Already Grounded (From Hollywood, That Is)