Khloé Kardashian Swallows a Bloody Fish Eye Instead of Saying If She Thinks O.J. Simpson Did It 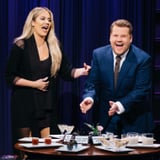 Khloé Kardashian followed in little sister Kendall Jenner's footsteps on Wednesday night when she agreed to play a round of "Spill Your Guts or Fill Your Guts" with James Corden. The hilarious Revenge Body star accepted the disgusting challenge with a good sense of humor, happily taking a swipe at Rob Kardashian and his fiancée, Blac Chyna, rather than downing a cup of cod sperm. When it came time for James to spill or fill, he also sidestepped the gross concoction in front of him by admitting that of all the celebrities he's met, Pierce Brosnan is the rudest. Khloé's second turn was when things really got interesting, though, thanks to the late-night host asking if she thinks "O.J. Simpson did it." Her response? Swallowing a bloody fish eye. Maybe American Crime Story: James Corden Forcing Celebrities to Eat Fish Eyes can be the plot of Ryan Murphy's next season?

طريقة عمل طاجن حنشان
Not all advice is good advice
Cognitive Distortions, Sobriety, And …
The Best Place to Throw Sharp Objects
Related:
This Speech Robert Kardashian Reportedly Gave to His Daughters About Fame Will Break Your Heart

Khloé Kardashian Swallows a Bloody Fish Eye Instead of Saying If She Thinks O.J. Simpson Did It