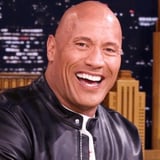 Dwayne Johnson was crowned People's Sexiest Man Alive this year, but it seems the title has gone to his head. During a hilarious appearance on The Tonight Show Starring Jimmy Fallon on Friday night, the Jumanji actor joked that the honor has turned him into "a monster." He explained that he now responds to longtime girlfriend Lauren Hashian by grunting and giving her sexy looks, adding, "I don't even have to speak in full sentences." Dwayne also failed to reveal if there's anything unsexy about him, however, Jimmy Fallon came prepared with Dwayne's high school yearbook photo. Not sure what a "dead caterpillar" mustache looks like? Check out the clip above to find out.

What You Need to Know About the Dow J…
Manton Rempville -6
History Of Antique Persian Gorevan Ca…
Boston’s Fidelity: A new face of the …
Everybody wants me, but do I want mys…
Related:
Why 2016 Was Dwayne Johnson's Best Year Yet

Everybody wants me, but do I want myself?