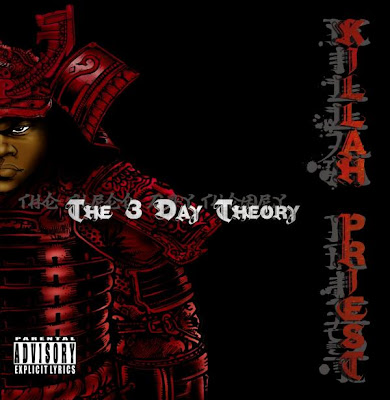 
INFO: Killah Priest first made his presence known on Gza's Liquid Swords album with the song "B.I.B.L.E.". Quickly after the release of Liquid Swords Killah Priest found himself signed to Geffen Records. His first album Heavy Mental would become an instant classic and would sell close to 400k units. In 2010 Killah Priest is back with a lot to prove to a younger audience and a die hard fan base who has never left. 3 Day Theory finds Priest at his lyrical best, crafting a dark tale on "Psalm of Satan" from the point of view of Lucifer to the conspiracy driven warning on "Shadows". "Outer Body Experience" echoes back to Priest's Heavy Mental days and "Priest History" unfolds the story of how Priest got involved with the Wu Tang Clan. Then there are the harder, more violent verses on "The Destroyer", "Fire Reign" and "Birds" that show anger and desire still burning strong inside one of the worlds greatest MC's. The 3 Day Theory is Killah Priest's strongest most thoroughly consistent work to date and matched with some of the best production Killah Priest has ever worked with. In 2010 Killah Priest let the world know he was back to reclaim his throne and take his rightful place on the world stage of Hip Hop