'Sharknado 5: Global Swarming' and its cameos are back 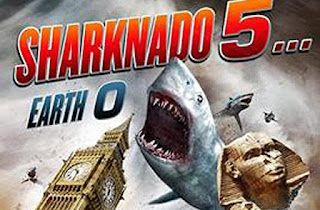 The next installment of "Sharknado" is going back. An all new movie is headed back to SyFy.

"Sharknado 5: Global Swarming" will premiere on SYFY Sunday, August 6 at 8/7c and will air in more than 100 countries.

In "Sharknado 5: Global Swarming," the mission gets personal for Fin Shepard (Ian Ziering) and his bionic wife, April (Tara Reid) when their young son gets trapped in a traveling shark and transported all over the world.

From London to Rio, Tokyo, Rome, Amsterdam and beyond, our globetrotting heroes will seek assistance from a highly-skilled squad of royals, scholars and Olympians, enlisting famous faces from news, entertainment, and sports in their most epic battle yet.

The list of cameos in the upcoming movie are:

· Fabio (Model) as the Pope

· Charo (Musician, Comedian) as The Queen of England

· Olympic diving medalists Greg Louganis as Zico, a high-end art thief, and Tom Daley as himself

· Porsha Williams ("The Real Housewives of Atlanta") as Andromeda, an archeologist and member of the elite "Sharknado Sisterhood"

· Ross Mullan ("Game of Thrones" White Walker) as Dr. Wobbegon, a scientist who has made breakthroughs in meteorological studies to track Sharknado storms and more.

Best Online Services for Students to Download Before Spring Comes

'Sharknado 5: Global Swarming' and its cameos are back