Haitian rapper and Musician, Wyclef Jean who's gearing up to release his latest album ' Carnival III: The Fall and Rise of a Refugee', has revealed why his first track off the album was titled 'Fela Kuti'

Crunchyroll – How to Watch Anime Onli…
Podcasting
How much does Drake make in a year
Richy Rymz – The Koty Mixtape
The Spring of Khosrow Carpet
According to the three-time Grammy Award-winning entertainer, the song is inspired by the Nigerian Afrobeat legend and it samples his 'Eko Ile' track.
He said he named it Fela Kuti because he wants kids not just to download the song but Google Fela and know who he's and what he means.
Speaking to XXL magazine in a recent interview, Wyclef, also said he and Fela had some parallel things in common, as they both studied Jazz in the UK, contested for President in their respective countries and had their songs helping the poor masses to reach out to the government.

'I decided to name it Fela Kuti because, for me, I feel like we be thinking of [Bob] Marley, we give a lot of people from our past props, so when the kids hear Fela Kuti, I really want them to Google it.

Fela Kuti studied jazz in England. Wyclef studied jazz at Vailsburg High School. Fela Kuti then went back to his country and tried to help his country by running for president. Wyclef, you know, did the same thing.
Then, Fela, through all his obstacles and all that, his music is what pillared him right back to the top. He understood the strongest way to help politically was to make sure the music was bangin'. So for me, the same way kids can have songs called 'Wyclef Jean' who are influenced by me, I want kids to know who Fela is and what he means.”
The album 'Carnival III: The Fall and Rise of a Refugee', will be released in September 2017. 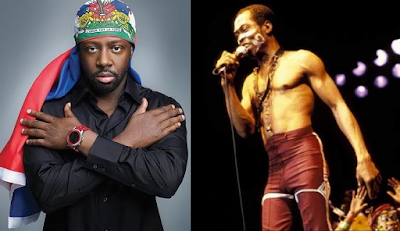