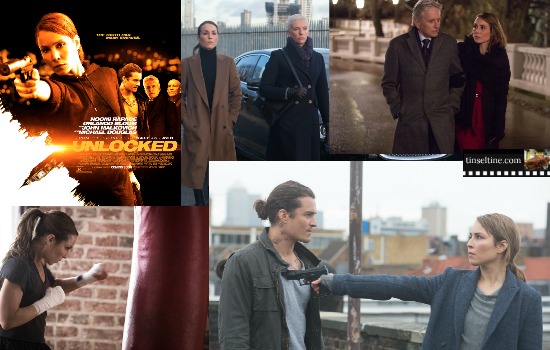 Every so often I am sent a screener code by a studio and asked if I'd be interested in reviewing a film that will have a limited release. I love this, of course, because it makes me feel like a real insider. This time it was Lionsgate who emailed me about a Spy thriller called UNLOCKED. It stars Noomi Rapace (Swedish version of The Girl with the Dragon Tattoo Series) John Malkovich, Michael Douglas, Orlando Bloom and Toni Collette (who looks just like Annie Lennox in this movie).

At first I didn’t understand the title until I watched an interview with Rapace, who plays Alice a CIA interrogator in Unlocked. She explained when you break a suspect and extract information, that’s called unlocking. Alice was considered one of the best interrogators in the agency, until it took her too long to unlock a suspect, resulting in a Paris bombing, which claimed a number of innocent lives. Following this incident, for two years Alice self-imposed herself to a desk duty type job, but now she's being pulled back into active service because of a tricky and urgent set of circumstances.


The script feels very timely with the increase of terrorist attacks in Europe; however, the script was actually written in 2008 by Peter O’Brien and produced by Georgina Townsley.  They shopped the script around for a while until it was picked up by Producer Lorenzo di Bonaventura who’s behind a number of other spy thrillers like JACK RYAN SHADOW RECRUIT with Chris Pine, Angelina Jolie in Salt and those fun spy movies with Helen Mirren and Bruce Willis RED.  It’s directed by Michael Apted who’s still directing at age 76. He’s best known for The Coal Miner’s Daughter (Sissy Spacek), Gorillas in the Mist (Sigourney Weaver) and Nell (Jodie Foster ). And he's also directed action movies like the Bond film The World is Not Enough (Pierce Brosnan) and The Chronicles of Naria. All of which makes him a really good choice to direct a woman in a thriller.

Bottom Line: Unlocked is not meant to be a high octane, humorous spy Movie like we've seen recently in THE HITMAN'S BODYGUARD or style over substance, like Charlize Theron in ATOMIC BLONDE  although, it would be fun to watch these two trained female agents go up against each other and see who comes out the victor.  Rather, Unlocked has a more realistic take on trying to head off terrorism. I was engaged in the going's on, never lost focus... However, poor Noomi Rapace broke both her nose and her foot doing her own stunts, and I fear those scars will far outlast the movie that gave them to her.

A Furry’s Guide to Cryptocurrency
Paul Oz Takes Oil Painting Into the 2…
“The Friend Who May Not Seem a Friend…
6 Interesting Places To Hold Your Nex…
What Causes Bed Bugs?
Philly Audiences can see Unlocked at AMC Neshaminy 24 IMAX Bensalem, PA and On Demand everywhere on Friday, September 1 2017.
T & T's LAMB (movie bloggers association) Score: 3 outta 5 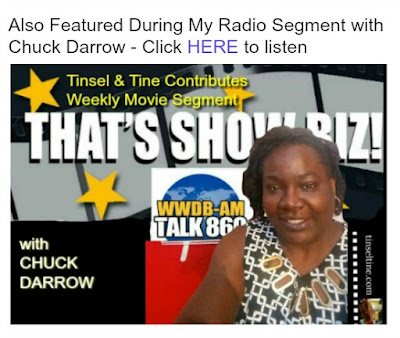 
This post first appeared on Tinsel & Tine Philly Film & Food, please read the originial post: here
People also like
A Furry’s Guide to Cryptocurrency
Paul Oz Takes Oil Painting Into the 21st Century
“The Friend Who May Not Seem a Friend” – The Cat and the Fire, Post 2 of 3
6 Interesting Places To Hold Your Next Corporate Function
What Causes Bed Bugs?
Self Motivation: How to Keep Moving Forward In Your Career or Business
10 Notable Online Video Makers That is Sure to Give Your Business an Edge
Capture Attention and Drive Traffic with Catchy Headlines: 7 Ideas for Blog Titles
Things You Should Stop Worrying About in Bed
Raam Tamil Movie | Aarariraro Video Song | Jiiva | Saranya | Yuvan Shankar Raja | Star Music India