While the government of Ghana and other international security agencies are fighting Internet fraud, Shatta Wale and Sarkodie have openly endorsed the menace in a new single titled "It's My Life". 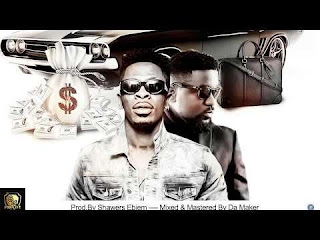 'Sakawa' is a Ghanaian term for illegal practices which combine modern Internet-based fraud with rituals. This is one of the major problems facing Ghana.

Reports indicate foreign investors and businesses have lost interest in Ghana’s economy due to this menace. The country is losing, citizens are wailing but the issue seems to be worsening day-by-day.
'Sakawa', a menace that successive governments, authorities, and security agencies have condemned seems to be on the rise, with its recruit system enticing a great majority of unemployed youth.
There have been several mechanisms and strategies developed to combat the crime. Top Ghanaian public figures and role models have run several campaigns over the years to help curb the menace.
But, that is not the case for two of Ghana’s most influential musicians and role models, Shatta Wale and Sarkodie.
While millions of people are fighting against ‘Sakawa’, the music duo has recorded a new song to endorse the crime.
In the new song titled 'It’s My Life' and produced by Shawers Ebiem, the duo glorified the act and openly encouraged the youth to practice without shame because ‘it’s their lives’.
The song addresses the issue of ladies who don't have any interest in Rastafarians, ragamuffins and ‘Sakawa boys’.
Instead of motivating such ladies to stick to the moral value, Shatta Wale and Sarkodie encouraged the ladies to take a second look at their decision because according to them, men involved in such crimes might be the best choice.
“If I be Sakawa boy eeh//I dey like am oh//that be my life//If I be game boy ooo//I dey like am ooo//that be my life//I dey work hard for the money eeh//I dey like am ooo//that be my life,” Shatta Wale sings the chorus.
Sarkodie, on the other hand, tries to make ladies who avoid fraudsters look stupid by dropping verses that encourage the act.
“Shatta se mmaa nnim nea w)n akoma p3//Nea eho nhia na 3y3 mo f3," Sarkodie spits in the intro.
Meanwhile, a popular social media ‘Boss Chic’, Lydia Osei popularly known as DC Queen is reported to have been murdered recently with her vital organs removed. The death was attributed to rituals by ‘Sakawa’ boys at Dome Kwabenya in Accra.
Reports further stated DC Queen was murdered after an all-night party at Just Torch pub and her vagina and tongue were also cut off for ritual purposes.
This is not the only instance. There have been several reports over the years and government is doing everything possible to curb the issue.
But, here is the case two of Ghana’s most influential musicians are openly endorsing the dirty act.
I leave the rest to your judgement!
Sir Dantl
0541223603/0574285760