I don’t use juju - Fancy Gadam 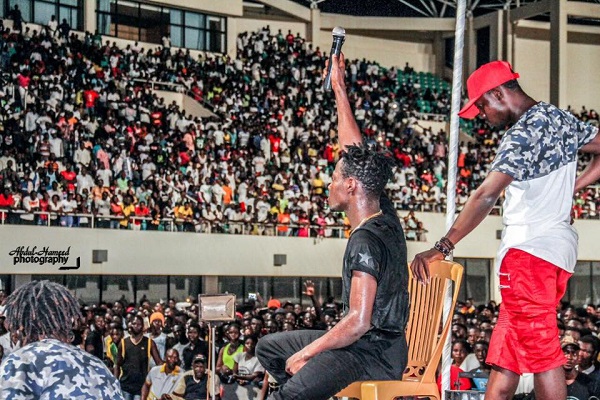 It is not often that a Northern-based musician breaks into the Southern sector, woos followers and stays relevant but it seems that is what Fancy Gadam has done.

His performance at the recently held Zongofest Honours was well received. Prior to that , he rocked the capital city with his Gadam Nation concert which was hosted at the National Theatre last November

His popularity in the nation’s capital keeps soaring and the rumour mongering wheel has started grinding that he could not be achieving this feat on his own but with the help of spiritual powers.

But the Champion Boy singer says his achievement in the music industry is due to hard work and nothing else.

“I have actually heard people say I use Juju in building my large fan base but there is no such thing but hard work and blessings from God” Fancy Gadam told Showbiz in an interview.

According to the Vodafone Ghana Music Awards (VGMA) New Artiste of the Year, it has never crossed his mind to visit any shrine or anyone to seek for spiritual powers .

Asked the secret to his success, Fancy Gadam disclosed that humility and his close contact with his fans is the reason they hail him all the time.

Fancy Gadam said he started building his fan base a decade ago when he was an underground artiste and he is glad he has become a household name today through his hard work.

“I used almost five years to build my fan base and I can confidently say there is no artiste in Ghana who is bigger than me in the Northern Region of Ghana” he said.

Gaddam regularly draws crowds to his shows that even the biggest stars in the country would be jealous of. Due to his massive ‘pull factor’ and ability to fill venues in the Northern Region, any artiste who goes to the North and wants a sold out show knows they need to get Gadam on the bill.

This has enabled the young star to share the stage with prominent names such as Davido, Wizkid, Sarkodie, Stonebwoy and many others.

He is known for songs such as Concrete, Total Cheat, Nation Champion and Mujahid. His first album, ‘KALIPO’, released in December 2010 took the North by storm.


This post first appeared on CediGh.com, please read the originial post: here
People also like
10 Attractive Circle Beard Styles & How to Get Them
Prezzybox – Two Night Glamping Break for Two – UK
Save Cost And Time With This Guide On Hiring Graphic Designers
Introduction: Author Karen Wiesner
How to choose great gifts for women in 6 steps

I don’t use juju - Fancy Gadam