UK inflation rate drops back to 3% 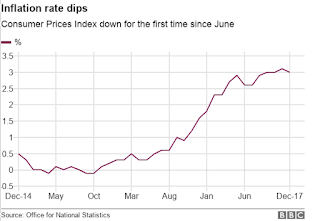 The UK's Inflation Rate has fallen for the first time since June, mainly because of the impact of air fares.
The Inflation Rate dipped to 3% in December, down from November's rate of 3.1% - a six-year high.


The Office for National Statistics (ONS) said that while air fares rose last month, it had a smaller impact than at the same point in 2016.


It added that a drop in the price of toys and games also contributed to December's fall.


The ONS said it was too early to say whether this was the start of a longer-term reduction in the rate of inflation.
The Bank of England has said it thinks inflation peaked at the end of 2017 and will fall back to its target of 2% this year.


The rate had been rising over the past year, partly due to the fall in the value of the pound since the Brexit vote which has pushed up the cost of imported goods.

UK inflation rate drops back to 3%