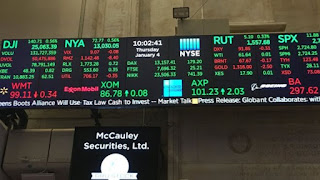 US stock markets opened at new highs on Thursday, with the blue chip Dow Jones Industrial Average crossing 25,000.
The gains extended an eye-popping run for Wall Street, which has surged over the last 12 months amid growth in the US and global economies.


On Thursday, markets got another boost after the ADP National Employment report estimated that employers added 250,000 jobs in December.


The US is due to release official job figures on Friday.