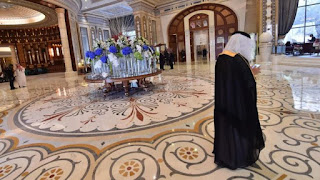 Most of those detained in a sweeping anti-corruption drive in Saudi Arabia have agreed settlements with the authorities in exchange for a pardon, the attorney general says.
Prominent figures, including princes, ministers and businessmen, were taken into custody last month.


A statement said that 320 people have been called in for questioning while 159 are currently being detained.


Those who denied the allegations or refused settlements face prosecution.