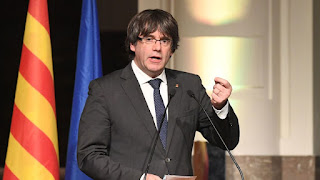 A judge in Spain's Supreme Court has withdrawn the international Arrest Warrant for deposed Catalan Leader Carles Puigdemont.
The court explained that Mr Puigdemont has expressed willingness to return to Spain, alongside the other four members of his cabinet who fled to Belgium after the independence referendum.
According to a statement from the court, Judge Pablo Llarena said the five wanted to participate in the regional elections, which were launched at midnight on Tuesday.


The statement added the international warrant cannot apply because the crimes are alleged to have been committed as part of a wider group.


Mr Puigdemont has not yet reacted to the news, but his lawyer Paul Bekaert appeared surprised when he heard the news from a reporter.


Despite Mr Puigdemont's position in Belgium, he addressed a political rally in Catalonia via video link for the official campaign launch.


He told supporters to view the election as the second part of the referendum.


He said: "The results of October 1 are still valid.


"There are many of us who don't give the Spanish government the authority to dissolve a legitimate legislature."


The five politicians travelled to Belgium after declaring independence for Catalonia following a referendum in October.
The declaration was considered illegal by the Spanish parliament.


Mr Puigdemont and his four former colleagues face charges including embezzlement, rebellion and sedition, and face decades in prison.


The Supreme Court said withdrawing the warrant would prevent more than one European jurisdiction overseeing the case.

Regaining fitness after major surgery…
Metropolitan Museum’s Emperor’s Carpe…
What is Conversion Tracking? How to S…
نصائح مهمة عند الاصلاح بين المتخاصمين
Self-care lets me not give a “darn” a…