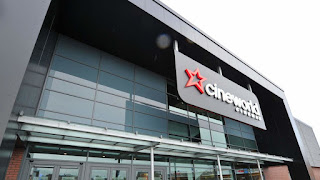 UK cinema chain Cineworld has announced plans to enter the US market through the acquisition of larger operator Regal for £2.7bn.
The FTSE 250 company said the proposed deal, which is subject to shareholder and regulatory approval, would create the second-largest cinema operator by Screen numbers, with almost 10,000 between them currently across 10 nations.
The US has the largest box office takings worldwide and Regal Entertainment Group has 7,315 screens in 561 theatres - the vast majority of them in the US.


Cineworld said it aimed to fund the purchase through a £1.7bn rights issue - the sale of new shares to existing investors - adding that it would also move to raise a further £3bn through the refinancing of existing debt.


It added that it would look to make some savings across the enlarged group worth £112m which would include the closure of some screens though it declined to say where.

Seven WordPress Themes For Any Online…
Win Your Share of N400Million in Coca…
CBD Capsules Or CBD Oil Tinctures: Wh…
How to Deal with the Weekend Syndrome…
Use of ACE Money Transfer Mobile App…