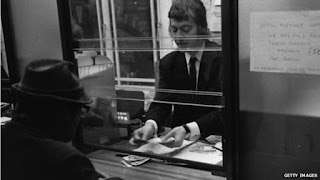 Typical consumers will Visit a Bank branch four times a year by 2022, turning instead to their mobile phones for services, according to forecasts.
At present, people visit seven times a year on average, industry analysts CACI have said.


It forecasts that contact with banks will rise - but primarily through apps, with desktop banking also shrinking.


Hundreds of branches have closed in the UK in recent years, with banks pointing to changing consumer habits.


Although the number of visits to banks may be falling, the proportion of those who use a branch, however infrequently, is relatively unchanged. This has prompted a warning from the forecasters that the public still see branches as having a role to play.
On Tuesday, the industry marked the 50th anniversary of the first cash machine, and many ATM manufacturers claim that new technology allows the most up-to-date machines to carry out 90% of all tasks conducted in a branch.

What Are Your Worst Grief Triggers ?
How to Exchange ETH to BTC Without Go…
Landmark beach Lagos: All you need to…