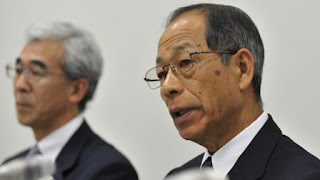 Six executives sacked by Japan's Olympus have been ordered to pay more than half a billion dollars in damages after a massive accounting fraud.
The camera and medical equipment firm brought the case against ex-chairman Tsuyoshi Kikukawa and 15 others.


A Tokyo court found Kikukawa and five others liable for $529m.


The scandal was one of the biggest financial frauds in Japan's history, but Kikukawa and two other executives who pleaded guilty never went to jail. Instead, they were given suspended sentences of up to three years.
An Olympus spokesman declined to comment, saying the former employees could appeal against the ruling.


One of the six men found liable by the court has since died, but his family could still be held responsible for his share of the damages, according to the AFP news agency.