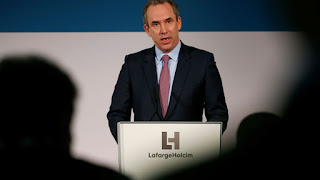 The Boss of the world's largest cement maker is to quit as it battles claims Money it gave to Armed Groups to protect its interests in Syria, extended to so-called Islamic State.
LafargeHolcim CEO Eric Olsen made the announcement weeks after the firm admitted Lafarge had giving money to "sanctioned" groups in 2013 and 2014 - ahead of its 2015 merger with Holcim.


However, it denied extremists, including United Nations-designated terror groups IS and al Qaeda-linked Nusra Front, had benefited.


The Franco-Swiss firm said on Monday that while an internal investigation had cleared Mr Olsen of any knowledge of the historic matter while at the helm of Lafarge, it had identified a series of control failings at the company and he would depart in July once he had implemented "remedial measures" to the now enlarged group.


LafargeHolcim announced the inquiry after admitting it had handed over money to guarantee safe passage for employees and supply its £680m operations in Syria.
It said a number of measures taken to continue safe operations at its $680m plant in the war-torn country were "unacceptable", and "significant errors of judgment were made that contravened the applicable code of conduct".


The factory stopped operating after it was evacuated in 2014.


French prosecutors are investigating to establish whether there was any potential criminality in relation to the payments, including the possibility that international sanctions were broken.