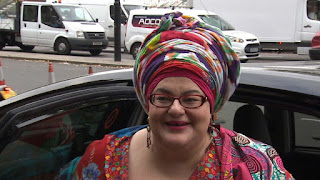 The founder and former trustees of Kids Company face being banned from serving as company directors after the Charity collapsed in 2015 amid allegations of serious financial mismanagement.
Sky News has learnt that the Government's Insolvency Service has written to lawyers acting for Kids Company's former board members - who include Alan Yentob, the ex-BBC creative director, and Richard Handover, a former boss of WH Smith - to warn them that it is minded to pursue disqualification proceedings against them.


The move is also thought to include Camila Batmanghelidjh, Kids Company's flamboyant but controversial founder, who ran the charity on a £90,000 annual salary and vehemently defended its governance even as it lurched towards bankruptcy.


The Insolvency Service, which has powers to seek bans on directorships for individuals of up to 15 years, said: "Our investigation into the circumstances surrounding the collapse of Keeping Kids Company and the conduct of the directors is ongoing.


"It is not appropriate to comment further at this time."


Kids Company's failure in the summer of 2015 was a major embarrassment to David Cameron, the then Prime Minister, who had backed a £3m Government grant to the charity little more than a month before its demise.


He had said that the valuable work undertaken by Kids Company meant it was worth giving it "one more go", and was so moved by Ms Batmanghelidjh's work that she was awarded a CBE while Mr Cameron was PM.


The charity claimed to support 36,000 children and young adults, working with those who were struggling with mental health issues after being involved in gun and gang crime, or who were suffering from neglect.


In total, it received £42m of public money over a 15-year period - although some media reports have put that figure at as much as £50m.


It eventually closed its doors, though, after the Metropolitan Police launched an investigation into allegations of abuse at the charity.


A damning report by MPs in February 2016 outlined an "extraordinary catalogue of failures", with its board of trustees reliant on "wishful thinking and false optimism".


It also accused senior politicians of being in thrall to Ms Batmanghelidjh.


The Insolvency Service, which is part of the Department for Business, Energy and Industrial Strategy, is required to investigate company insolvencies, although its reports are never published.

What is Dash Cryptocurrency? What wil…
Best Story-Rich Games on PC: November…
Today I am thinking about who I am wr…
PHOTOS: 22-year-old Lady Gives Birth …
Halloween Festivities