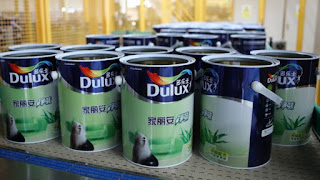 The US firm behind Johnstone's Paints has launched, what it says, is a final bid to bag Dutch rival Akzo Nobel.
PPG Industries said it was raising its offer for the company, which includes the Dulux and Hammerite brands, by 8% to €96.75 per share, valuing Akzo Nobel at €26.9bn (£22.8bn).


It also made public a letter to its rival's board outlining its position, hoping supportive shareholders would exert greater pressure on directors.


Both previous bids were turned down on value grounds. Akzo Nobel also responded by announcing plans last week to hive off its speciality chemicals business, in a move that would see £1.6bn returned to shareholders.


Its share price was 5% higher in afternoon trading in Amsterdam.


The takeover effort is important as both companies have significant operations in the UK.


Akzo Nobel, which bought ICI in 2008, employs 3,500 staff while PPG has 10 manufacturing and R&D sites.
A deal could result in job losses as operations are streamlined, though PPG insisted Akzo Nobel's marine and protective coatings business would continue to be based in both the UK and the Netherlands.


In the letter to the Akzo Nobel board, PPG chief executive Michael McGarry said: "Despite your rejections, private and public, of our invitations to date, we are confident you will find that a combination of our two companies will be beneficial to your stakeholders - and more beneficial than the revised strategy that you recently announced in response to our proposals.


"In light of your prior public responses, we have no choice but to make this letter public.


"Our revised proposal represents a second substantial increase in price along with significant and highly specific commitments that we are confident Akzo Nobel's stakeholders will find compelling."


Akzo Nobel responded: "Akzo Nobel confirms today it has received a third unsolicited and conditional proposal from PPG for all outstanding share capital of the company.


"In accordance with its fiduciary duties and acting under the Dutch governance code the Board of Management and Supervisory Board of Akzo Nobel will carefully review and consider this proposal."

List Of World’s Top Muslim Women Everyone Should Know