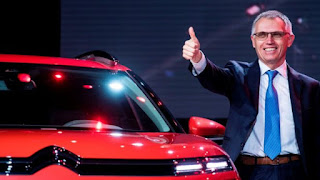 The French car firm PSA Peugeot-Citroen is under investigation by French prosecutors for cheating Diesel emission tests, according to reports.
The Reuters and AFP news agencies say they have been told by judicial sources that the company is being investigated for breaking consumer protection laws.


Diesel emissions have been under the spotlight since the Volkswagen scandal.


But PSA said its vehicles have never been fitted with software to let its diesel engines deceive pollution tests.


A PSA spokesman said the company "respects regulations in all countries where it operates" and denied doing anything illegal.

The group was referred to French prosecutors by the consumer watchdog DGCCRF after its staff seized documents from PSA offices in France a year ago.


The accusation against PSA is that the emissions from its diesel engines might "render its merchandise dangerous for human or animal health".


Fraud investigators have already accused the partly state-owned Renault car firm of cheating on pollution tests for diesel and petrol engines for over the past 25 years, and with the knowledge of its top executives.


Since September 2015, Germany's Volkswagen has admitted fitting 11 million cars - 8.5 million of them in Europe - with devices to fool diesel emissions tests.


Last month, PSA agreed to buy Opel and Vauxhall from the US firm General Motors for £1.9bn in an attempt to challenge Volkswagen.

FRED Energy — Looking Towards Future …
2 reasons why demand for Phototherapy…
DIRE WARNING - World Food Supply
The Story of Renault India Behind #Re…
The Future of Sailing : How Technolog…

The Future of Sailing : How Technology is Enhancing Yachts

Large Cruise Ships Produce As Much Air Pollution In One Day As 1,000,000 Cars

The Rise Of PreFab Homes