EuroMillions jackpot of €88.5m won by ticket holder in Ireland 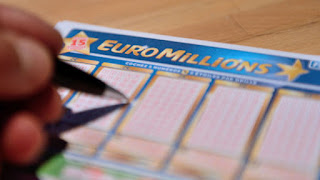 
Just one ticket matched all the numbers in the draw.


The jackpot was not enough to make the ticket holder Ireland's biggest lottery winner. That honour went to Dolores McNamara, who won €115m (£98m) in 2005.


An anonymous winner netted €94m (£80m) in June 2013 after sharing the jackpot with a winner from Belgium.


The figure is also well short of the largest wins in the UK, topped by Adrian and Gillian Bayford from Haverhill in Suffolk, who netted £148m in 2012.
A year earlier, Colin and Christine Weir scooped the biggest win in sterling terms by winning £161m in 2011.


Ireland has had 10 EuroMillions jackpot winners and the UK has had 63. France has had the most with 83.


To make it on to the list of Ireland's wealthiest 300 people requires assets of €30m, according to the Sunday Independent.

EuroMillions jackpot of €88.5m won by ticket holder in Ireland