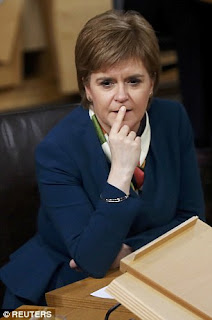 Nicola Sturgeon said that plans to take the UK out of the EU's single market brought a second Scottish independence referendum "undoubtedly" closer.
The first minister was speaking after Prime Minister Theresa May outlined her government's thinking on Brexit.


Ms Sturgeon, in a BBC interview, agreed that another vote on independence was "all but inevitable".


She believed that Scotland should be able to choose a "different future" to the one outlined by Mrs May.


The Scottish government has repeatedly raised the prospect of a vote on independence if Scotland's membership of the single market was threatened by a so-called hard Brexit.