Trump says trade deal will be done 'quickly and properly' 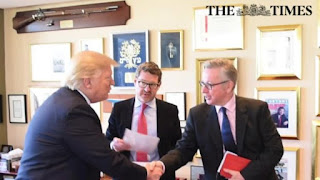 Donald Trump has pledged to secure a quick post-Brexit trade deal with the UK in an interview with MP Michael Gove.
The US President-elect told The Times newspaper leaving the European Union would be a "great thing" for the UK, hailing the referendum result as a demonstration that British people "want their own identity".


In contrast to Barack Obama, who said the UK would be at the "back of the queue" for trade talks, Mr Trump made clear a deal with Britain would be a priority for his administration.


He said: "We're gonna work very hard to get it done quickly and done properly. Good for both sides."


The President-elect spoke to the prominent Leave campaigner in his New York office - making Mr Gove the second British politician, and the first MP, to get a meeting. 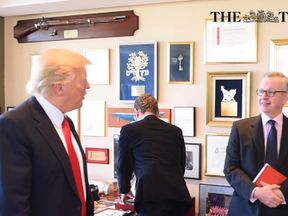 He made clear that, unlike Mr Obama who backed Remain in the referendum, he supported the narrow win for the Leave campaign.


He said: "People, countries, want their own identity and the UK wanted its own identity. Brexit is going to end up being a great thing."


Mr Trump said he believed Europe's migration crisis had been the deciding factor in the referendum.


He said: "I do believe this, if they (EU countries) hadn't been forced to take in all of the refugees, so many, with all the problems that it... entails, I think that you wouldn't have a Brexit.

Mr Trump also signalled his desire to reach a new agreement with Russia on reducing stocks of nuclear weapons.


Despite having prompted fears of a new arms race last year when he said the US needed to "greatly strengthen and expand" its nuclear capability, Mr Trump indicated he would like to strike a deal with Vladimir Putin.


He said: "For one thing, I think nuclear weapons should be way down and reduced very substantially, that's part of it."


He did have some criticism for his Russian counterpart, calling Moscow's intervention in Syria "a very bad thing" which had created a "terrible humanitarian situation".
But, in comments that will please Mr Putin, Mr Trump told Germany's newspaper the NATO military alliance was "obsolete", complaining that some countries don't contribute their share financially and criticising its lack of a clear anti-terror strategy.


The President-elect said orders would be signed the Monday after his inauguration to strengthen America's borders.


They could include travel restrictions on Europeans as well as "extreme vetting" of those from areas known for Islamist terrorism.


He also said he believed German Chancellor Angela Merkel had made an error when she opened Germany's doors to migrants.


"I think she made one very catastrophic mistake and that was taking all of these illegals," he said.


The meeting between Mr Trump and former Tory leadership contender Mr Gove is another potentially awkward episode for the Prime Minister, who will not visit the new President in the White House until some weeks from now.


But he revealed Mrs May had written to him and said: "I love the UK. She's requesting a meeting and we'll have a meeting right after I get into the White House and it'll be, I think we're gonna get something done very quickly."


He said the PM's letter - sent shortly after Christmas - had included a copy of Winston Churchill's address to the US after the Japanese attack on Pearl Harbour.


In the letter, she said she hoped the feeling of "unity and fraternal association" between the two countries was "as true today as it ever has been".


Mr Trump was scathing about US foreign policy, describing the invasion of Iraq as "possibly the worst decision ever made in the history of our country".


He said Afghanistan was "going badly" and the offensive to retake Mosul - Islamic State's last stronghold in Iraq - had been a disaster.

Trump says trade deal will be done 'quickly and properly'