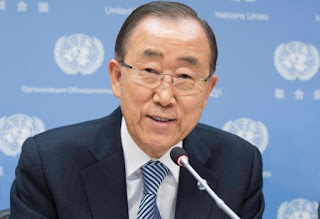 UN Secretary General Ban Ki-moon has hinted that he may shortly run for the Presidency of his native South Korea.
Mr Ban's term as the world's top diplomat expires at the end of December.


In his final press conference as UN chief, Mr Ban said that after some rest he will return to South Korea and consider how best to help his country.


South Korea's next presidential election is scheduled to be held in December 2017.


However, a poll could take place within two months after the country's parliament voted to impeach current President Park Geun-hye over an influence-peddling scandal.
Ms Park is accused of allowing a close friend to profit from her connections with the presidency.

‘The Angry Cabbage’. A Vegetable Rese…
CBD 2020: What to Expect + Our Top Pr…
Vechain Blockchain Technology Powers …
Green Plastics? A Review of Medium De…
Mancora Peru Nightlife 2020 {Where To…