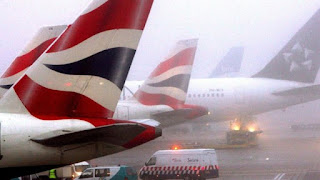 Fog is affecting travel in southern England with some flights cancelled due to Poor Visibility at London airports.
London City airport diverted all inbound flights on Saturday while Heathrow and Gatwick have also reported disruption.


Passengers have been told to expect delays and to contact their airline before travelling to the airport.


There will be further disruption for travellers over Christmas because of industrial action over pay disputes.


The poor visibility in south-east England caused at least a dozen British Airways flights to be cancelled.
"In common with other airlines, we are experiencing some disruption to our flights," a BA spokesperson said.


BA warned that there would be knock-on delays due to disruption at Heathrow. It said to expect delays and a "small number" of cancellations, as the airport has restricted landing and take-off.


On Friday, BA cabin crew based at Heathrow said they would strike on Christmas Day and Boxing Day in a row over pay and conditions.

A Comparison of the Environmental Imp…
CBD 2020: What to Expect + Our Top Pr…
Simple Tips To Increase Self-Esteem
Hey You, Finish 2019 Strong
Highlands, Buttermilk Opening and Sum…