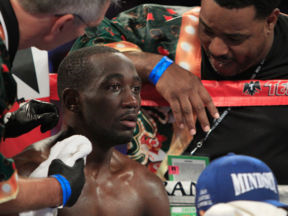 World boxing Champion Terence Crawford has been jailed for 90 days over a disturbance at a car body shop in Nebraska.
The WBO and WBC super lightweight champion caused damage worth $3,000 (£2,400) when he forcefully removed his 1984 Chevrolet Monte Carlo from a hydraulic lift because he was unhappy with a repaint job.


The 29-year-old was found guilty of disorderly conduct and causing damage to property at the Extreme Custom Fleet & Auto Spa in Omaha.


Douglas County Judge Marcena Hendrix ordered him to serve two years on probation and to do 120 hours of community service following the incident in April.


He told Crawford: "You've continued to act as if you are above the law, and you are not."


Lawyer Matthew Kahler lodged an appeal and said he hoped the boxer would be released after posting a $10,000 bond.


Crawford, who beat John Molina Jr at the weekend to retain his titles, is likely to serve about 50 days in prison under state sentencing guidelines.
Mr Kahler said: "This is his first and only adult conviction of any significance, and for crimes of disorderly conduct and property damage it's an abnormally high sentence.


"It's the most significant sentence I've seen from that judge for those charges."


The body shop had billed Crawford $2,500 to paint his car. Crawford paid about half up front, but refused to pay the balance as he was not happy with the work and the length of time it took to complete.


Owner Michael Nelson refused to release his car until the bill had been settled, but Crawford took it back himself - damaging a hydraulic lift in the process.


The boxer was able to move a 600lb engine underneath the lift so that his vehicle could be lowered to the floor.


The incident was captured on surveillance video.

Here Are 3 Reasons Why You Should Alw…
Today I am thinking about who I am wr…
Where To Stay In Santorini On A Budge…
Manny Pacquiao Launches ‘Pac’, The Fi…
GYMNASTICS - Sky's the Limit