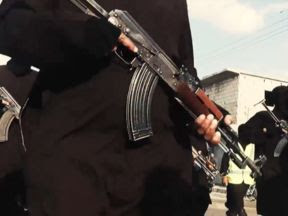 Islamic State terrorists are "moving in migrant flows, hiding in plain sight", the head of the Armed Forces has warned.
In comments that could reignite the debate around ID cards, Sir Stuart Peach said Britain should think about how it "manages identity" due to the global reach of IS militants who deliberately destroy their identity documents to travel illegally into other countries.


Sir Stuart warned that IS, also known as Daesh, represents the closest danger.


Speaking at the Royal United Services Institute, he said: "I worry about the global reach of Daesh as an idea - copycat, using the internet - more than the internet - using social media, popping up all over the world.


"The Chinese state has accepted they have a problem. This is not now a localised phenomenon, it is now a wider phenomenon.


"And of course we face…a potential network of combat-experienced terrorists".


He added: "They are moving in migrant flows, hiding in plain sight.


"One of the obvious deductions…is how we manage identity in a world where people are deliberately trying to destroy their identity documents and/or they move in migrant flows."

Sir Stuart's comments come as British military personnel arrive in the Middle East to train "moderate" Syrian opposition forces, who are attempting to open up a second front around IS stronghold Raqqa.


Speaking ahead of a summit of defence ministers in London, Sir Michael added that Britain is taking a leading role in the fight against IS "through our airstrikes, intelligence, surveillance and reconnaissance, and our training".


At the meeting, the Defence Minister will reveal that he has agreed to "surge" the number of data recovery experts to exploit material obtained as IS forces are defeated or flee from Mosul in Iraq.