EU leaders to discuss Brexit without Theresa May 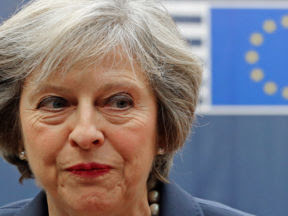 Theresa May will be absent from a meeting of the European Union's 27 other leaders later as they thrash out their plans for handling Brexit talks.
The discussion, which will take place in Brussels after the Prime Minister has left a summit meeting of all EU leaders, will decide how the bloc will organise itself for the talks which will follow Mrs May triggering Article 50.


A Downing Street spokeswoman said the talks showed that Brussels is "facing up to the reality that the UK is leaving the EU" and that Mrs May would trigger Article 50 by the end of March.


Under a draft deal to be discussed by the 27, the European Commission is to be appointed as the chief negotiator with the UK for Brexit talks.


The move appears to be designed to prevent British negotiators from approaching EU member states individually and to bar the UK from "discussions of decisions concerning it".


Mr Verhofstadt said: "If the government leaders do not take the European Parliament's role seriously, we'll negotiate directly with the British.
"If that's what they want, they'll get it."


Mrs May will hold talks with the outgoing president of the European Parliament Martin Schulz on the margins of the Brussels summit.


She will also meet Latvian Prime Minister Maris Kucinskis and Lithuanian President Dalia Grybauskaite - meaning that she will have held talks with leaders from all EU countries apart from Austria and Bulgaria by the time the summit starts.


It comes as Brexit Secretary David Davis admitted he would accept a transitional deal to implement the terms of Brexit "only if it's necessary".


Mr Davis told the Commons Select Committee for Exiting the European Union that while people in the UK want the withdrawal from the EU to be "done properly and soon", a transition phase could be a possibility.


He said the Government's plan for Brexit would not be published before February and that he would be keeping open as many negotiating options as possible.

What is Conversion Tracking? How to S…
Things To Do In Copenhagen
Digital Currency – A Better Substitut…
500 One Word Substitution Book PDF Fr…
How to Create a Winning Black Friday …

EU leaders to discuss Brexit without Theresa May