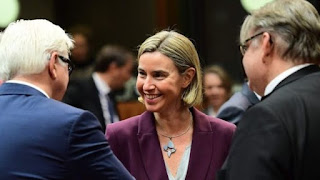 European Union countries have agreed a plan to boost the organisation's Defence and security role.
The plan envisages greater co-ordination in areas like EU-led peacekeeping missions outside the bloc.


However, EU foreign policy chief Federica Mogherini stressed that the bloc did not intend to compete with Nato or create a European army.


She added that the plan was under consideration before Donald Trump's victory in US presidential elections.


During the campaign, Mr Trump suggested that Washington may not automatically come to the aid of a Nato ally under attack, criticising low levels of defence spending by some EU members of the military alliance.


The defence plan was agreed at a meeting of EU defence and foreign ministers in Brussels on Monday.


"This is a qualitative leap in the European Union's security and defence," Ms Mogherini told reporters, while French Defence Minister Jean-Yves Le Drian said that "Europe needs to be able to act for its own security".


Ms Mogherini said the EU would not be competing with Nato but rather would strengthen the alliance, and nor would it be creating an EU army or a military headquarters.


What it would seek to do is to provide far-greater co-ordination in areas like peacekeeping missions to African countries, naval efforts to reduce refugee flows, and defence spending and research by EU countries on items like drones and helicopters, she said.


The aim of all of these was to make both the EU and its citizens safer at home and abroad in an uncertain world, Ms Mogherini added.


But it has been given added impetus by Mr Trump's warnings that he expects Europe to pay more of the bills for its own defence, our correspondent adds.


He says that Brexit has also boosted the plan, because the UK has traditionally blocked such Franco-German initiatives to give the EU a greater security dimension.