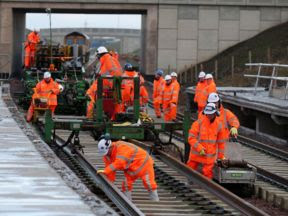 Philip Hammond is planning to invest up to £15bn into Britain's creaking transport network and hi-tech industries in an attempt to "future-proof" the economy from the turbulence of Brexit.
The Chancellor will back dozens of small-scale Infrastructure projects across the UK to get shovel-ready road and Rail Links off the ground.


Sky News understands Mr Hammond has earmarked several billion for various schemes - and could spend up to £15bn on infrastructure overall - as he looks for boosts to economic growth.


While Mr Hammond is still supportive of his predecessor's big ticket projects, such as HS2 and the Hinkley Point power station, the focus in his Autumn Statement will be on projects that are ready to go and can stimulate local areas in the next couple of years as Britain prepares for Brexit.


"Forget about the political ambition of George Osborne, (Hammond) is about practical ambition - trying to future proof the economy," said one figure familiar with his plans.


Mr Hammond also wants his infrastructure package to boost British productivity: better road and rail links should help to get people to work more quickly, while investment into the technology and science sectors should help create more highly skilled and better-paid jobs.


Despite high employment levels in the UK, productivity remains stubbornly low: on average, UK workers produce 35% less per hour than their German counterparts.


Economists suggest part of the UK's problem was the growth in low-paid, low-skilled jobs in the wake of the financial crisis.


Improving productivity is central to Theresa May's pledge to raise living standards for British workers because it makes it easier for employers to lift workers' wages as they get more bang for their buck from employees.


The Confederation of British Industry (CBI), which represents Britain's biggest businesses, has called on the Chancellor to invest £6bn into local housing, transport and hospital schemes in his Autumn Statement.


"We will see continued commitment to big infrastructure projects, we had decisions on Heathrow and HS2," the CBI's Rhian Kelly told Sky News.


"But I think that this Government also realises we need to do much more on a local level, particularly if it links to productivity and is outside London and the southeast."