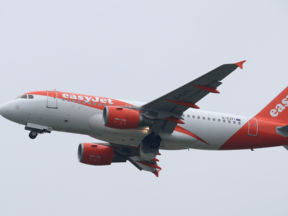 EasyJet has reported a 28% fall in annual profits amid a £138m hit from "unprecedented external events" and currency turmoil since the Brexit vote.
The no-frills carrier warned it expected the effects from the pound's collapse in value to continue to take their toll on earnings in its current financial year, but said it was planning to help offset them through new cost savings.


A group-wide review, easyJet said, would make it a "simpler, more efficient" company through greater use of technology with any job losses countered by its fleet expansion.


EasyJet said pre-tax profits for the year to 30 September came in at £495m - at the top of revised forecasts but the first decline in annual profit since 2009.


That was despite carrying a record number of passengers - 73.1 million of them - in the period, with its planes also 91.6% full.


The airline said a weak sterling resulted in an £88m hit to profits and it expected a similar number in the 12 months to September 2017 as it grappled with the effects of the referendum result.


EasyJet said it was close to announcing a new operational base within the EU to minimise the effects of Brexit on its business model, but it confirmed there were no plans to shift its headquarters from the UK.


Other headwinds in the period, it said, included "increased market capacity and aggressive pricing stimulated by a sustained low fuel price".
It also cited a "cooling of demand and reduced consumer confidence following multiple terrorism-related incidents" and higher holiday costs for UK travellers following the EU referendum - because of the weaker pound.


EasyJet reported too that "severe disruption" due to things like strikes and bad weather had resulted in 8,349 flights being either cancelled, delayed for more than three hours or diverted.


Chief executive Carolyn McCall said the airline had achieved a resilient performance in a challenging environment.


"Looking ahead, the easyJet model remains strong as does the demand environment and we continue to see opportunities in the medium term to grow revenue, profit and shareholder returns," she said.


"In a tougher operating environment strong airlines like easyJet will get stronger and we will build on our already well-established network.


"Almost half of our growth next year will be in the UK, with significant growth also in Switzerland, France and Italy.


"Our strategy of strengthening our positions at our key airports will see double digit growth in key bases in London, Manchester, Venice, Berlin and Amsterdam."